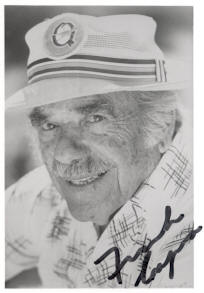 Frank Capra is my favorite director of all-tome. He made some of the greatest motion pictures in history including:

Capra won three Oscars for Best Director. They were for It Happened One Night (1935), Mr. Deeds Goes to Town (1936) and You Can’t Take it with You (1938). He should’ve won more of course (He was also nominated for Mr. Smith Goes to Washington and It’s a Wonderful Life). I’ve written a bunch of posts about Frank Capra movies and those associated with him. Here’s a sample:

I am so glad that I was able to correspond with Mr. Capra while I was a very young man. I felt compelled to write him a letter while he was reportedly sick and bedridden near the end of his life and he actually took the time to reply to me. He was very appreciative of the fact that his work was still making people happy and that they were still so important and motivational. He even sent me an autographed photo of himself (see image at the top)! It feels good to know that I at least got to tell my favorite filmmaker how much I loved his work. He passed away the same year that my own father died, 1991. It was a double blow for me.

One of the best auto-biographies that I’ve read was Frank Capra’s “The Name Above the Title” which not only chronicled his life and times but also documented the history of motion pictures itself. It is chock full of incredible behind the scenes stuff for all of the movies he made. I highly recommend reading this book.

Here are some wonderful video clips from AFI’s lifetime achievement award ceremony they gave to Frank Capra in 1982. All of his friends and colleagues showed up to celebrate the man and his films. It is full of amazing speeches. My favorite was at the very end when Jimmy Stewart gave a toast to Capra. “Here’s to Frank Capra, the richest man in town!”