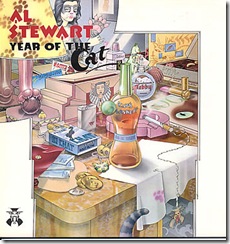 Ever since I was a kid I remember loving Al Stewart’s “The Year of the Car” for some reason. I’ve only grown to appreciate it more through the years. It was obviously inspired by Casablanca with its reference to a Bogart movie. Other parts of the song that stick in my head is the very beginning when he sings “She comes out of the sun in a silk dress running Like a watercolour in the rain.”

Alan Parsons produced the album and decided to add the memorable sax solo near the end of the song!

This started off as a completely different song. Al Stewart originally wrote the lyrics after seeing the British comedian Tony Hancock in Bournemouth, England in 1966. Hancock was very depressed, and the show was a disaster, with the comedian going to the front of the stage and addressing the audience directly and pouring out his soul. In Al Stewart: The True Life Adventures of a Folk Rock Troubadour, Stewart is quoted: “He came on stage and he said ‘I don’t want to be here. I’m just totally pissed off with my life. I’m a complete loser, this is stupid. I don’t know why I don’t just end it all right here.’ And they all laughed, because is was the character he played… this sort of down-and-out character. And I looked at him and I thought, Oh my god, He means it. This is for real.” Hancock killed himself in 1968 with a drug overdose. Stewart’s song was originally titled “Foot Of The Stage,” with the chorus, “Your tears fall down like rain at the foot of the stage.
Many of Stewart’s songs have alternate lyrics, and he wasn’t happy with the Hancock-inspired words, as he didn’t want to take advantage of the man’s tragedy and besides, no one in America knew who Hancock was. Al re-wrote the lyrics as “Year Of The Cat,” which he delivered to Parsons.

THE YEAR OF THE CAT

On a morning from a Bogart movie
In a country where they turn back time
You go strolling through the crowd like Peter Lorre
Contemplating a crime
She comes out of the sun in a silk dress running
Like a watercolour in the rain
Don’t bother asking for explanations
She’ll just tell you that she came
In the year of the cat
She doesn’t give you time for questions
As she locks up your arm in hers
And you follow till your sense of which direction
Completely disappears
By the blue tiled walls near the market stalls
There’s a hidden door she leads you to
These days, she says, I feel my life
Just like a river running through
The year of the cat
[Instrumental Interlude]
Well morning comes and you’re still with her
And the bus and the tourists are gone
And you’ve thrown away the choice and lost your ticket
So you have to stay on
But the drum-beat strains of the night remain
In the rhythm of the new-born day
You know sometime you’re bound to leave her
But for now you’re going to stay
In the year of the cat