Today is a landmark date in technology as Apple officially releases the much hyped iPad which will change the way we view computers yet again. However, don’t be fooled. This isn’t all that new or ground-breaking. When it comes to technology, everything old is new again.

For example, the concept of a tablet PC and laptop goes as far back as 1968 when the legendary Alan Kay (Xerox Parc pioneer of GUI & OOP) shared his concept for the Dynabook. Here’s an image from more than 40 years ago. 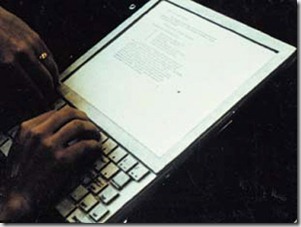 Here’s what Alan had to say about this new idea, “"One of the most compelling snares is the use of the term metaphor to describe a correspondence between what the users see on the screen and how they should think about what they are manipulating…  At PARC we coined the phrase user illusion to describe what we were about when designing user interface. There are clear connotations to the stage, theatrics, and magic – all of which gave much stronger hints as to the direction to be followed."

By the way, If you want to learn more about the history of computers then all you have to do is take a look at the history of innovations that came from Xerox Parc. They were Apple’s baby daddy and Steve Jobs doesn’t even try to hide that fact. It was his visit to this incredible wonderland that inspired his visions of a beautiful computing experience with elegant typefaces. It was also the birthplace of the mouse, graphical user interface, and much more.

Comments (3) on “Everything Old is New Again”