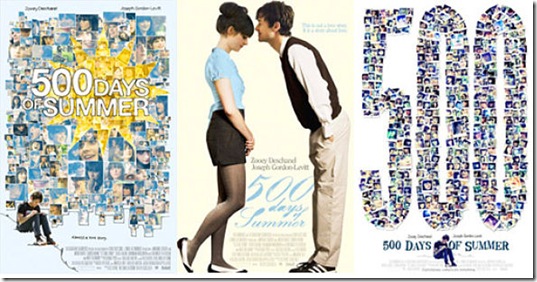 First, I must be upfront and confess my deep fanboy status for Zooey Deschanel, so that will always skew my review of anything she does. There, I said it. However, I will try to be honest enough to admit when something she’s done isn’t that great (for example, The Happening). Well, regardless of all that, I have to say that I absolutely loved the movie 500 Days of Summer starring Zooey and Joseph Gordon-Levitt who was fantastic! I was afraid that it would not live up to all the expectations I had for it but incredibly it far surpassed them! I think 500 days is like a modern day Annie Hall.

It’s an unconventional movie which doesn’t show the relationship in linear fashion like most would from day 1 through 500 but instead jumps around just like our memory does. It’s a refreshing approach to a movie that truly works well. It reminded me somewhat of the uniqueness of another favorite of mine, “Eternal Sunshine of the Spotless Mind”. This is an original movie that isn’t predictable and one of the best I’ve seen in a long time. Even Roger Ebert gave it his highest rating.

Here’s the trailer just to refresh your memory.

The other wonderful aspect of this story is the music! We all know that music adds or takes away a lot from the enjoyment of a movie but this one goes further and almost makes music another character in the movie itself! Each song was perfect for the scene it accompanied. Even the songs we barely hear play a big part in the story such as the one from The Smiths that Tom is listening to on an elevator that Summer comments on. My Favorite songs are “Sweet Disposition” by the Temper Trap and “US” by the fabulous Regina Spektor! Even old songs become fresh and new in this amazing movie, such as “You Make My Dreams” by Hall & Oates, “Bookends” by Simon & Garfunkel and “Please Please Please Let Me Get What I Want by the Smiths (three of my all-time favorite songs).

Speaking of “You Make My Dreams”, here’s the hilarious and delightful dance sequence the morning after Tom’s date with Summer! Who hasn’t felt like this before?

Here’s a fun short the two stars did with the director that has nothing to do with the movie. Still, it’s so enjoyable.