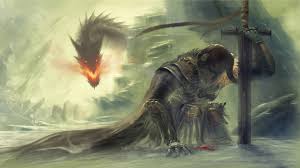 Mother’s day was excruciating today as it was the first one since I lost my beloved bride of 23 years. The kids and I celebrated as best as we could. I hid my sorrow as much as possible.
When I was finally alone and I allowed myself to cry I tried to make sense of why I feel like such a failure despite occupational success and accolades and then it hit me why.
This might sound chauvinistic and old fashion to you youngsters but I’ve always felt like my wife’s knight in shining armor, she always told me that’s what I was and so I believed it (like a schmuck). Anyway, for over 20 years of fighting off one dragon after another–one illness and another–I was able to help defend my wife and help keep her safe. I know she was the true fighter and the stronger one who endured unimaginable pain just to stay here in this realm with us but I felt as if I was helping to ward off the grim reaper with her. We were successful after many horrific attacks, year after year, until last December when we were completely blindsided.
I feel like an old knight who failed to protect the queen mother of our children. Every time I see them I want to apologize for not being able to keep their mother safe and sound. I apologize to her every day amidst a downpour of tears. I pray that she can hear me and forgive me.
This picture really sums up how I feel.

Oh How The Years Go By family
The Seven Year Itch family
Best Quality Heart family
How Safe Is Your Neighborhood? family
Motherhood will change your life family
Family 2.0 family