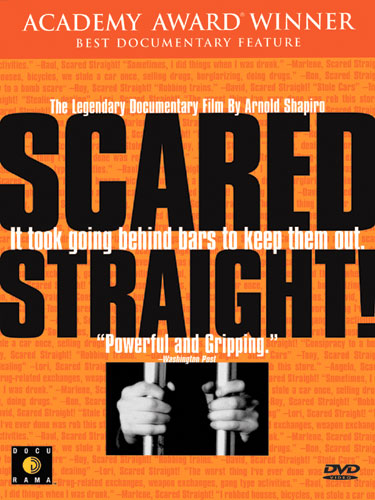 Scared Straight (1980) Won the Academy Award for best documentary in 1980 as well as the Emmy Award. It was a landmark event for primetime television because it was the first time that obscenities were allowed on the air.

The concept was simple yet extremely powerful. They brought a group of juvenile delinquents to a state prison to speak to incarcerated convicts face to face. The teens had no idea what was in store for them. The experience changed most of their lives as a 20th anniversary special follow-up revealed. Thus, most indeed were scared straight! They even followed up on some of the inmates who participated in the documentary.

I remember being completely captivated by the experience and even felt scared myself just thinking about winding up in such a place for whatever reason. It truly helped keep my nose clean while growing up on the mean streets of Newark, NJ!

Here are some videos from the original Scared Straight as well as the follow up they did 20 years later in 1999 (original was filmed in 1978 but released in 1980).
The last part of the 20th anniversary special is not on youtube for some reason so forgive me for not having the complete special available. I will add it as soon as I find it somewhere.

***UPDATE***
Sad news. Here’s what I found out in the YouTube comments of part six of the videos here:
“In 2007 Angelo was convicted of a 1982 murder where he stabbed a girl to death and then sexually assaulted her after that. He was caught by DNA evidence 25 yrs after the fact, so at the time of this interview he had known what disgusting things he had done and thought he got away with it. Uck, the lying scum makes me sick! Don’t think he was scared straight at all.”

Others have confirmed this shocking update about Angelo Speziale who lived as a free man for over 25 years with this horrific crime. He got married and had three children too. I guess they will share this update when they do a 30th anniversary edition. Here’s news coverage of the case that took 25 years to solve. Amazingly, if this guy wasn’t stupid enough to get arrested for shoplifting in 2003 then he never would’ve gotten caught for this heinous crime. Thank goodness for stupidity as well as the brilliance of the DNA detectives and New jersey lawmakers who allow many more cold cases to be re-opened!