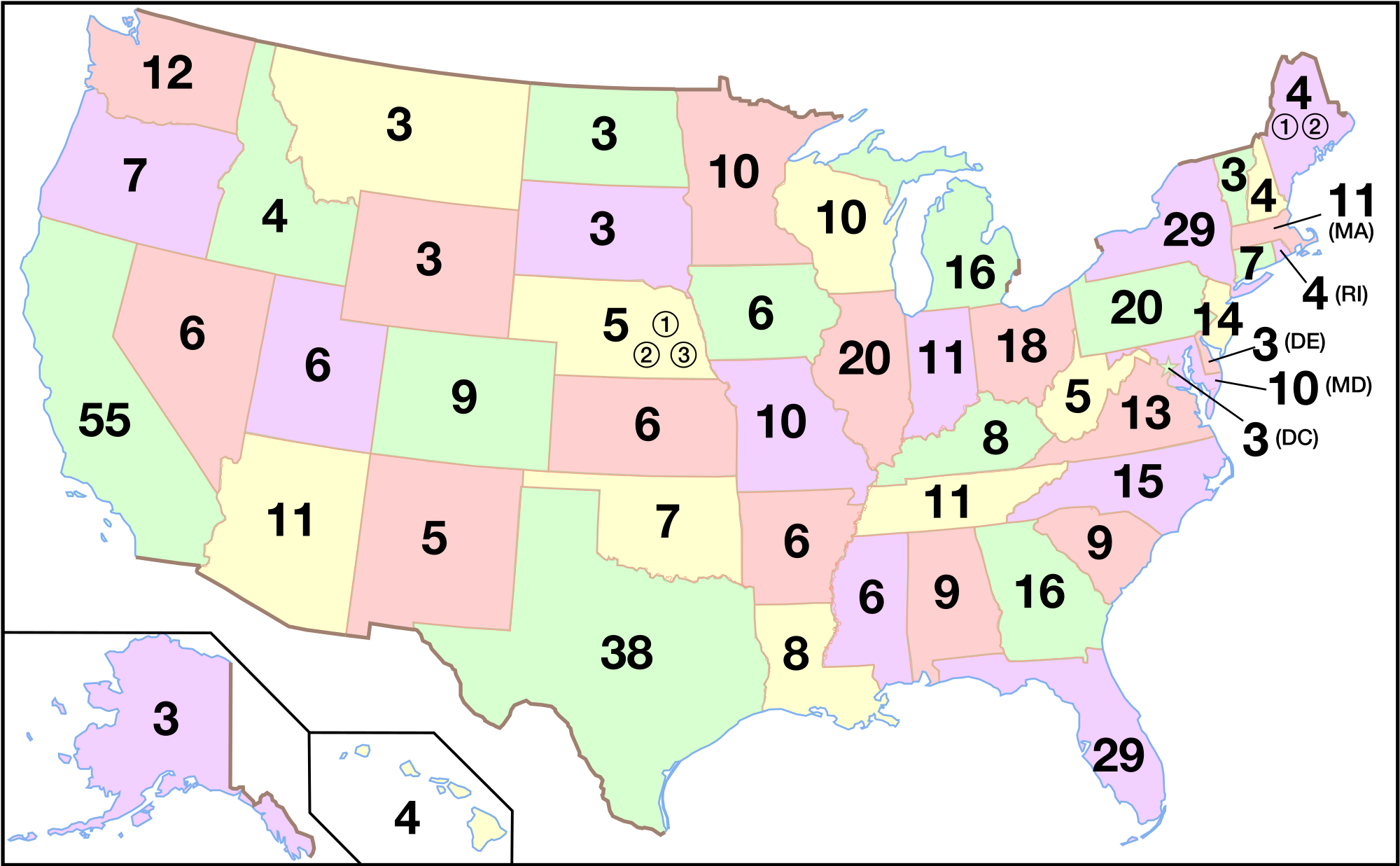 Most Americans vote in elections and the majority have heard about the crazy electoral college system but very few truly understand how it works. This includes me until I watched this video by “Adam Ruins Everything” which covered our whole voting system. It has been very upsetting and infuriating when you really understand how it all works or actually doesn’t work. I highly recommend watching the video as soon as possible to see what I’m talking about.

In the mean time, let’s go over some of the basics. As we all know, the candidate that wins 270 electoral votes becomes our President. There are a total of 538 electors, 435 representatives and 100 senators, plus the three electors allocated to Washington, D.C.. The six states with the most electors are California (55), Texas (38), New York (29), Florida (29), Illinois (20) and Pennsylvania (20).

It is legal for electors to vote for the candidate of their choice in 24 states! This means they could go against the popular vote in nearly half of the states! This has happened at least 80 times which is mind-boggling.

Because of this insane system, candidates can actually win the popular vote but lose the election because they didn’t win the right votes… the electoral college votes from the electors! Think it’s impossible? Think again because it’s happened four times! Here’s the summary from www.factcheck.org.

The 2000 election was the most recent when the candidate who received the greatest number of electoral votes, and thus won the presidency, didn’t win the popular vote. But this scenario has played out in our nation’s history before.

In 1824, John Quincy Adams was elected president despite not winning either the popular vote or the electoral vote. Andrew Jackson was the winner in both categories. Jackson received 38,000 more popular votes than Adams, and beat him in the electoral vote 99 to 84. Despite his victories, Jackson didn’t reach the majority 131 votes needed in the Electoral College to be declared president. In fact, neither candidate did. The decision went to the House of Representatives, which voted Adams into the White House.

In 1876, Rutherford B. Hayes won the election (by a margin of one electoral vote), but he lost the popular vote by more than 250,000 ballots to Samuel J. Tilden.

In 1888, Benjamin Harrison received 233 electoral votes to Grover Cleveland’s 168, winning the presidency. But Harrison lost the popular vote by more than 90,000 votes.

In 2000, George W. Bush was declared the winner of the general election and became the 43rd president, but he didn’t win the popular vote either. Al Gore holds that distinction, garnering about 540,000 more votes than Bush. However, Bush won the electoral vote, 271 to 266.

In 2016. Donald Trump defeated Hillary Clinton in terms of delegate count but lost the popular vote marking the 5th time this has happened.

How could such a horrible system continue to exist for over 200 years? Has there ever been an effort to reform or abolish it? The answer is yes, a few times but it’s never happened. Here are the times when we came close to changing the way we vote taken from FairVote.

Past Attempts at Reform

The rules of the Electoral College are not set in stone. While Constitutional amendments are rare, they do happen. Twenty-seven proposals have survived the difficult amendment process, and with much less popular approval than the movement for direct election. Over the history of our country, there have been at least 700 proposed amendments to modify or abolish the Electoral College – more than any other subject of Constitutional reform.

Here are just a few examples of past reform attempts:

1950: The Lodge-Gossett Amendment, named for its co-sponsors Senator Henry Cabot Lodge (R-MA) and Rep. Ed Gossett (D-TX), was a classic example of a reform plan known as proportional allocation. The plan was introduced in the 81st Congress (1949-1950) as an amendment proposal that would abolish the Electoral College as it was known, replacing it with a proportional electoral vote.

In this case, electors and the college would remain in place, but electoral votes would be allocated to presidential tickets in a manner directly proportional to the popular votes each ticket received in the states. The proposal was amended in the Senate to also require a 40% threshold of electoral votes for a ticket to be elected to the Presidency and Vice Presidency. If no one received such a threshold, the Senate and the House of Representatives, in a joint session, would then choose among the top two presidential candidates and their running mates.

The Lodge-Gossett Amendment passed the Senate with a super majority by a vote of 64-27, but died a bitter death in the House.

1956: Hubert Humphrey’s (D-MN) S. J. 152 was a new, unique proposal of reform introduced in the 84th Congress. In this plan, the Electoral College would be abolished as known, but the then 531 electoral votes would still be put to use. Two electoral votes would be awarded to the candidate winning the overall popular vote in each of the then 48 states. The remaining 435 would then be divided nationally in proportion to the nationwide popular vote. The proposal passed the House of Representatives, but later died in the Senate.

1966: Delaware filed a lawsuit against New York, arguing that its “winner-take-all” system for awarding electoral college votes effectively disenfranchised small states in the presidential election process. The Supreme Court, under whose original jurisdiction the case was filed, refused to hear it. However, Delaware’s action generated support from several other states and 11 more joined in the lawsuit: Arkansas, Florida, Iowa, Kansas, Kentucky, North Dakota, Oklahoma, Pennsylvania, South Dakota, Utah, and Wyoming.

See these documents from the case:

1969: This proposal came to be after the 1968 Presidential election, in which American Independent candidate George Wallace managed to obtain 46 electoral votes, generating concern over the possibilities of contingent elections and electoral vote-trading for political concessions. In the 91st Congress, Rep. Emanuel Celler (D-NY) introduced the proposal, which would abolish the Electoral College in favor of a direct popular election with a 40% threshold and a runoff if no threshold was achieved. The bill was wildly popular in the House, passing 338-70, yet failed to pass in the Senate due to a filibuster.

1979: After the close election between Jimmy Carter and Gerald Ford in 1976, Senator Birch Bayh (D-IN) introduced a proposal in the 96th Congress to abolish the Electoral College and replace it with direct election. The measure failed the Senate by a vote of 51-48 in 1979. Because of its failure in that chamber, the House decided not to vote on its version of the proposal.

1992 & 1997: Hearings were conducted to consider reform possibilities, but no proposal left the committee chamber.

2004: Colorado proposes, by ballot measure 36, to amend the way it allocates its electoral votes. Instead of remaining a winner-take-all state, the proposal, if passed, would have changed the state to proportional allocation.

*Only two proposals involving the Electoral College have ever reached the ratification stage, and both passed (the 12th and 23rd Amendments).

The way we vote needs to change once and for all. Leaving it up to a handful of voters, 538 of them, instead of the American people is ridiculous. The electoral college system has to be abolished immediately. So does the horrific Gerrymandering practice which I won’t get into here. Just go here to learn about this hideous practice.

Our forefathers did not do a good job with our voting system. At first it was just white land owners, then years later they allowed only white men to vote….. 70 years later Blacks were allowed but it was very difficult to vote so it wasn’t until 1965 that Blacks could vote as easily as whites. Women didn’t vote until the 1920s.  Citizens convicted of a felony are not allowed to vote still.

So we need to fix the voting districts and get rid of the electoral college and all those electors and let the American public decide who needs to lead the country and who should represent them in congress and the senate.

Here’s the irony from all this. When I published this article I had some people criticize my message about abolishing the Electoral College system because they believed it was designed to prevent controversial candidates such as Trump from becoming President. These complainers made it clear that they were Hillary Clinton supporters so can you imagine the looks on their faces this morning when they realize that their candidate won the popular vote but lost the electoral college vote? It is just too precious to describe.

In any event, like it or not this is the current system we have in place. I still believe it needs to go away and the popular vote instituted as the method of electing the President for the United States of America. This does not mean Trump would have lost. It merely would have changed the entire campaign strategy for both candidates who followed the traditional methods of focusing on the swing states with the delegate counts needed to win the election.

HOPE IS ON THE WAY

Here is some great news. In this video, Ralph Nader talks to Abby Martin about a movement that aims to replace the Electoral College system with a National Popular Vote! This movement has made incredible strides by avoiding the ineffective path through an amendment to the constitution which has always failed and going the local state legislation method instead! They have gotten 11 states so far to pass this law that would give all of their votes to the candidate with the most popular votes which means they’ve gotten 165 delegates already! That is 61% of the 270 delegates needed to win the Presidency! They are Rhode Island, Vermont, Hawaii, Maryland (the first to do so), Massachusetts, Washington, New Jersey, Illinois, New York, California and Washington D.C.

This is the website for the National Popular Vote movement. Here’s more about its founder Steve Sliberstein. The bill has been presented to the remaining 39 states so this could become the way we vote for the President by 2020! Here’s a map of the status of the states and this legislation.

Election 2016 sure has been an eye-opener when it came to the electoral college system vs popular vote. I have to confess that the things I’ve learned from this election and everything I’ve read about the pros and cons of the electoral college stem has changed my mind. I admit when I’m wrong and I believe I am off base with the abolishment of the electoral college. For a good summary please read this: http://www.faithwire.com/2016/11/14/why-did-americas-founding-fathers-create-the-electoral-college-expert-responds-to-critics/

I know understand it much better. I was swayed by Adam Ruins Everything video. The electoral college system prevents candidates and parties from winning with only a handful of large states and ensures the President will be someone that the majority of the country voted for. It gives voice to ALL states, no matter how small they are.

Now that I understand it and believe we need to keep it in place, the National Popular Vote movement concerns me now because it is getting so close to killing the electoral college. We shall see what happens.