Here’s my infographic which I call a PaiChart.

It’s a work in progress so please excuse the crudeness and any mistakes. I’m trying to learn as much as I can about Google’s new G+ circles and the flow of information and posts. At first glance everything seems simple and easy but as you use the service you learn about its intricacies and some design flaws that will be fixed in time. After all, it is still early field trial beta (though it’s almost 2 months old now and Google has spent over a year working on this). 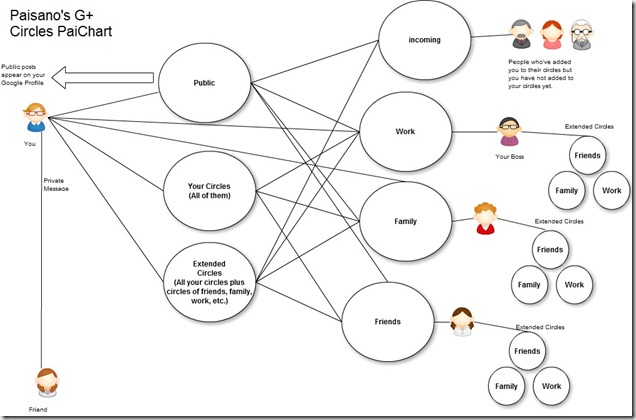 In a nutshell, here’s what I believe our options are for publishing posts on G+

Private messages are easy. You send a message just to an individual or group of individuals by adding their names and removing all circles. Easy cheesy.

Sending a post to a circle or several circles only goes to the people that you have added to those particular circles and no one else.

When you select the circle called Your Circles that means the message will go to ALL of your circles.

Posts here go to all of your circles as well as the incoming circle for all of the people that have added you to their circles but that you have not added to any of your circles yet. Phew, that was a mouthful! But wait, there’s more! Your public posts also go to your Google profile for all the world to see, hence the term, Public.

Ah, this is where the plot thickens even more. Some people confuse “Your Circles” with this one but that could be a fatal mistake. Here’s why:

Posts to Extended Circles are unlike Your Circles because it goes beyond the scope of the people you’ve curated into your circles of trust. Again, hence the term Extended. So who gets to see these posts? While they are not as public as Public posts, they do appear in many streams of strangers you don’t know because your post is shared with circles of people in your circles and so on. How many levels or circles does that mean? Who the heck knows at this point. I mentioned it could be a fatal mistake because some people will share messages with extended circles thinking only the people they have in their circles will see it, but that is not true. Because of the extra reach this means those posts could be seen by people you don’t want reading them such as your boss, spouse, fringe friend, A-lister, etc. So please be careful. When in doubt, don’t send it out.

Like I said earlier, I could be off here, especially with the public and extended circles parts. Please let me know if you have a handle of this stuff.

Going forward, I truly wish Google would give us public circles which would allow us to share our circles and allow people to join/leave at will as well as public circles that can be managed like public groups where an admin can curate the members (such as for a company with many employees). We also need ability to nest circles within other circles.