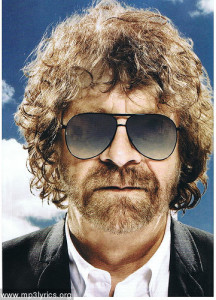 I love Jeff Lynne and ELO. Here’s a wonderful documentary about him and his band. It’s such a good piece about his life and career. You can see the influence of the Beatles on his music. I especially loved when Paul McCartney (of all people!) is interviewed and describes his reaction to hearing ELO for the first time and how he thought it was obvious they were “borrowing” from what the Beatles did on Sgt. Pepper but then he talks about how bloody good they were and you couldn’t resist their music. The topper is when he says he wished the Beatles did some of their songs! Wow… that is the highest praise of all! There are many other big names interviewed who share how much they liked Jeff Lynne’s work like Tom Petty and George Harrison (Jeff produced George’s Cloud 9 album and they became best friends for 17 years until George passed away). I never realized Jeff co-wrote Tom Petty’s “Free Falling” which is one of my favorites! Then there’s the whole Traveling Willburies project which was awesome. I also didn’t know Jeff produced the Beatles reunion when they did “Free as a Bird” with the remaining three Beatles. There’s an audio recording of John Lennon raving about ELO in 1974 and called them the Son of Beatles and said they were doing things the Beatles never did.