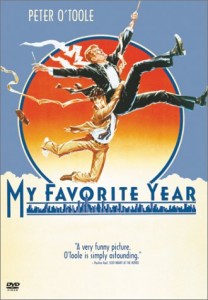 “My Favorite Year” (1982) is a wonderful movie. The legendary Peter O’Toole is at his best as the aging movie star that’s scared to death about appearing on live television in the golden era of the 1950s. He was nominated for an Oscar for his turn as Allan Swan the swashbuckler with a drinking problem in real life.

Part of the charm of this movie is the way it captures the nostalgic feelings people have for that period of time. Sure, things are never as pristine or as idyllic in reality as they tend to be in our minds, but that’s the beauty of motion pictures. This movie is an enjoyable trip.

In a touching subplot, Allan Swan can’t seem to find the courage to speak to his daughter whom he abandoned.

The other thing that’s wonderful about this movie is the behind the scenes look at the making of the 1950s live show which was based on Sid Cesar’s Show of Shows. That show was the breeding ground for many future comedic giants such as Carl Reiner, Woody Allen, Neil Simon and many more.

Mark Linn-Baker was also excellent as the young man responsible for babysitting the troublemaking matinee star who has a weakness for drinking and the ladies. Here’s a funny scene that shows what he has to deal with.

My favorite moment comes at the very end when Swann is acknowledging all the cheers from the audience. Here’s the ending including that touching scene.