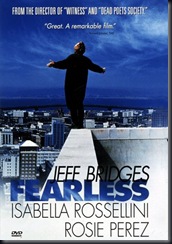 The movie “FEARLESS” (1993) is another one of those films that stays with you forever. Every once in a while I’ll remember a scene from that movie starring Jeff Bridges. It’s another classic directed by Peter Wier who also did Witness, Dead Poet’s Society, Green Card and The Truman Show.

It centers around a man (Jeff Bridges) that survives a horrific plane crash. He struggles with his demons and guilt over why he was spared and so many others perished. He meets another survivor from that crash, played wonderfully by Rosie Perez. She portrays a mom that has to endure the anguish of losing her baby in the crash, blaming herself for not holding on to her child tight enough.

I guess it’s always extra special whenever a movie or book covers a near-death experience. This movie does a fantastic job with this subject matter. All of the characters are realistic, including the helpless wife played by the lovely Isabella Rossellini. The ending isn’t the usual Hollywood type either. What a wonderful experience you’ll never forget.

Here’s the intense crash scene set to a ColdPlay tune