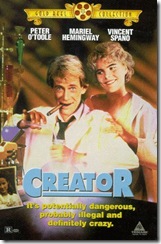 “Creator” (1985) starring Vincent Spano, Peter O’Toole, Virginia Madsen and Mariel Hemingway is a delightful romantic comedy that had a most interesting premise. It centered around a mad scientist (O’Toole) who tries to re-create his late wife via cloning. Yes, it was way ahead of its time.

Yes, it was a crazy idea because he was already in his 50s so even if he were successful in his wild experiment, he’s be in his 70s by the time she hit 20. Still, it allowed the movie to bring up some interesting points of discussion about love and closure.

The storyline between Boris (Spano) and Barbara Spenser (Madsen) was another important element to the charm of this movie. Without giving away too much, what happens between them at the end of the movie was surprising and enlightening.

Mariel Hemingway plays a nymphomaniac that falls for the whacky scientist and steals the show with some hilarious over the top scenes. She delivers some of the movies funniest lines.

Here are some clips from “CREATOR” .

To Kill a Mockingbird Books
Slumdog Millionaire Movies
I Will Find You Movies
You ARE home Movies
Definitely, Maybe Movies
Someone Like You Movies