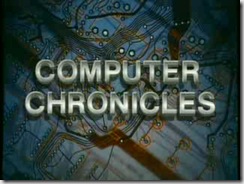 The Computer Chronicles TV show was on the air from 1983 to 2002. The host was Stewart Cheifet who later did Net Cafe. Here are some very interesting segments on “NEW” technology that we take for granted today. New age things such as the CD, email and a browser!

Here’s a tour of the Boston Computer Museum from 1983!

Here’s the show about optical storage from 1985 introducing something new called the CD!

Here’s the show covering email and a system that read your email to you over the phone. Wow.

Interesting sidenote: One of the co-hosts was Gary Kildall who created CP/M and the founder of Digital Research, Inc. As legend has it, IBM attempted to license his CP/M operating system for the IBM PC but he resisted and Bill Gates stepped in with DOS and the rest as they say is history. Don’t feel too bad though for Kildall, he eventually sold DRI to Novell and made millions. He did die young though in 1994 at the age of 52.