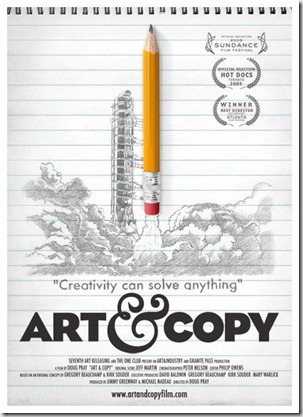 I love the show “Mad Men” so this documentary called “Art & Copy” was right up my alley! It’s all about the power and beauty that can be marketing and advertising when done right. It covers a lot of the glory from Madison Avenue from the 50s and 60s and beyond.

It’s full of wonderful little behind the scene stories for some of the most successful ad campaigns. I really enjoyed the honest and hilarious comments from some of the giants of the industry. This was a total delight. If you are a creative type then you will also enjoy this. The slogan is “Creativity can solve anything”

Here’s the trailer. It’s streaming in its entirety right now on Netflix.