Google Plus continues to grow with over 60 million users after six months and they keep adding new features little by little. One of the most important features that I am hoping to see soon is something called Public Circles. Let me explain why I think this will become important for the future of the social network. Take a look at this PaiChart (Infographic I made). 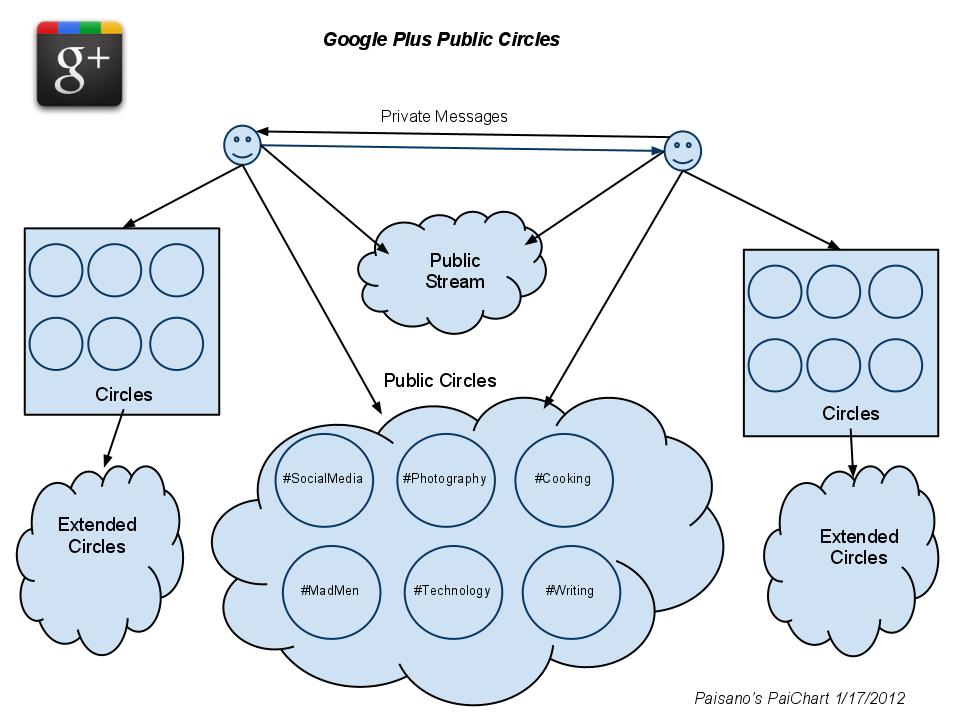 1.  Private Messages. Members can send messages to another individual member (or several at a time). These are like direct messages on Twitter.

2.  Public Stream. All posts sent to the public stream  appears in everyone’s stream that happens to be in any of your circles

3.  Your Circles. You can send messages to one particular circle or several at a time or all of them at once.
This means only the people you’ve added to those circles will see those messages.

4.  Extended Circles. This is a little tricky but basically it means you don’t know who’s going to see your messages
due to the fact that messages will be sent to the circles that belong to the people you’ve added to your circles and so on.

Why not just stick with regular hashtags then? Well, because the downside to hashtags is that they are always public so everyone in your circles
sees every post you send with hashtags to the public stream which could be annoying to many of them. Being able to isolate where the messages go
could be very useful.

Another benefit to Public Circles is the fact that they would be self-curating as people could add/remove themselves at any time. If you get tired of seeing posts about     photography then you can easily unsubscribe from that public circle. There could be other topics you want to try instead.

As for managing these public circles, that’s something that has to be ironed out. Google could assign moderators to monitor each public circle or the members of public circles could vote for and elect the admins. We should also be allowed to create our own public circles which could be about topic under the sun. They would be like Twitter lists.

I know Google has Sharable Circles where we can curate a circle and then share it with others who can then copy them to their own collection of circles. That’s totally different than public circles because this involves a lot of manual manipulation for each member. We have to add/remove each member to each circle where as a public circle has people adding/removing themselves. Of course we can still maintain our own private circles if we choose to do so.

Basically, public circles would be like the new age hashtag where members can subscribe and unsubscribe any time they want. There would/should be a directory of every Public Circle available for all members too. We should be able to see who’s in each public circle as well. We can choose to join the public circle or create our own based on that public circle like we can do with sharable circles.

What do you think of the idea for Public Circles? Wouldn’t you like to be able to subscribe/unsubscribe to self-curating public circles as well as create your own? This could be invaluable for brands and businesses too.